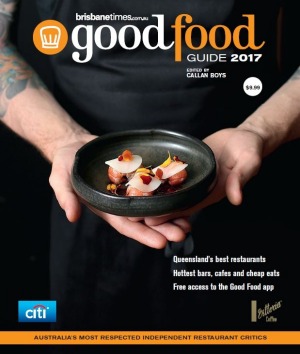 Looking to celebrate an occasion in a different state? Use our drop-down tool to find our recommendations on the best restaurants Australia-wide.

The Good Food Guide is the ultimate companion for anyone dining out. Each year it produces a stellar lineup of restaurants, cafes and bars, and profiles the chefs, service kings and queens, and sommeliers worth talking about. Its expert panel, boasting over 37 years of experience reviewing restaurants, uses a scoring system to award "hats", prestigious awards and honourable mentions at the annual Good Food Guide Awards.

This year's Brisbane event was held 18th July and saw Queensland's culinary geniuses eagerly await the announcement of the Brisbane Times Good Food Guide 2017 winners. The results are now out and for the first time, two Brisbane restaurants – Esquire and Urbane – each received three hat ratings, proving that Brisbane is evolving into one of Australia's major food hubs.

Among the winners were many of our Good Food Gift Card participating restaurants who we take our hats off to! We've dished up the full details on who they are, so dig in…

Esquire has been Brisbane's most highly awarded restaurant since 2012, and once again they have held onto their three hats. This upscale restaurant offers imaginative Modern Australian degustation menus that change on a daily basis, and its performance is nothing short of masterful.

Esquire's chef, Angus Baker, also took home the award for 'Young Chef of the Year 2017r'. Having worked alongside Gerard's Bistro chef Ben Williamson before moving to Esquire, 24-year-old Angus Baker has been taught by the best. Aria's Ben Russell, head judge of the Young Chef of the Year award, said, "when the dish he presented arrived at the table, we all commented on how beautiful its fragrance was. It was focused, clean, perfectly executed and most importantly, delicious. He showcased local ingredients but it didn't feel forced – it was an intelligent use of legitimately good produce."

Urbane (Up one hat)

Urbane Restaurant is a Brisbane food institution focusing on providing diners with new taste sensations using innovative, out-of-the-box techniques. Having been awarded two hats annually since 2014, Urbane has this year been awarded three – a reflection of its teams growing strength.

Not only that, but Urbane's sharp-suited manager and group partner Andy Buchanan won the 'Citi Service Excellence Award 2017'. Queensland Guide editor Callan Boys was quoted saying, "Urbane has really come into it's own – Andy Buchanan has led an amazing team, and Alejando Cancino's cooking is tight, refined, elegant and very, very delicious."

Providing a simple and casual a la carte menu, the food at Esq. may be less formal than 3-hat winning Esquire – but it's still just as tasty. Its focus on hero ingredients such as locally sourced and sustainably caught seafood and high grade meats makes for a memorable experience full of flavour and texture.

Gerard's Bistro (Up one hat)

Located in Brisbane's Fortitude Valley, the stylish Gerard's Bistro saw an increase in hats at this year's awards. Ben Williamson's menu is inspired by Southern Europe, the Middle East and Northern Africa, and has resulted in the attainment of multiple awards, including 'Best New Restaurant' in 2013, and Williamson being named as 'Citi Chef of the Year 2017'.

Founding and executive chef of Gerard's Bistro, Ben Williamson has steered the Middle Eastern-inspired menu from one to two stars this year, making him a very deserving winner of the 'Citi Chef of the Year Award' for 2017. Having cut his culinary teeth in Perth restaurants during the 90s, he's worked alongside some of the world's best chefs, and his formulated style has been driving Gerard's Bistro success since opening 2012. Williamson has recently taken up the reigns at The Apo up the road, making 2017 an exciting year for this kitchen star.

Another consistent regional winner to return with two hats was The Peak, noted for its Contemporary Australian menu. Being acknowledge by the Good Food Guide since 2013, it rose to two hats last year and has managed to hold onto them since. This restaurant is moving from strength to strength and is one to watch.

The Long Apron has long been a favourite at the regional awards. Head chef Cameron Matthews serves up multiple acts of surprising flavour combinations, and pairs this with conversation-stopping presentation. It's little wonder why The Long Apron was once again awarded two hats.

OTTO opened its doors only recently, but is already causing quite a stir in Brisbane's culinary scene. A product of the entrepreneurial minds at The Fink Group (Quay and OTTO Ristorante Sydney), it's conceptually similar to its sister restaurants, and houses a spectacular view overlooking the Brisbane River and Story Bridge. There's every chance that Brisbane's dining scene may one day be defined as "pre-Otto" and "post-Otto". As winner of 'Best New Restaurant' this year, The Fink Group have set new standards in hospitality, and their attention to detail and service is as polished as the branded glassware. Few expenses have been spared here, and the modern Italian food is downright brilliant.

This bistro-style restaurant open for breakfast, lunch and dinner, has been rapidly gaining in popularity amongst Queensland diners. Its unique alfresco experience makes it a deserving new winner of a Good Food Guide hat.

Restaurant Two is one of Brisbane's finest Modern Australian restaurants, and its high quality food and wine is a credit to David Purgh and his team.

Pick up a copy of the Brisbane Times 2017 Good Food Guide for $9.99 at newsagents and bookstores from July 19th.