The Duck Press Makes a Return 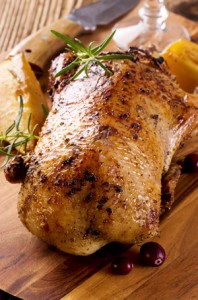 For diners of Sydney's Momofuku Seiobo, a strange looking contraption behind the bar is turning heads. The duck press, or Canard à la presse as it is traditionally known, is a classic French batterie de cuisine and according to Gourmet Traveller, it's making a comeback.

Chef-owner of a Brisbane restaurant, Romain Bapst has been interested in the device for a number of years and has been trialling ways of introducing the press in his menu. While he is yet to do that, he admits it is fun trying to come up with ways of using the 19th century press.

A canard à la presse is used to express the blood and bone marrow from a partially roasted duck so that the juices can be used to create a rich sauce that's enriched with the duck's ground liver, butter and either Cognac or Calvados. To be authentic, the duck needs to have its guts in place, but food regulations state that poultry must be eviscerated within an hour of being killed. For this reason, Bapst has been forced to look for other alternatives and he plans to buy the hearts and livers separately as well as confit the dug legs overnight rather than use the traditional method.

Watch this space, you could see a very special sauce appearing on the menu at Bapst's Lutèce Bistro & Wine Bar soon.